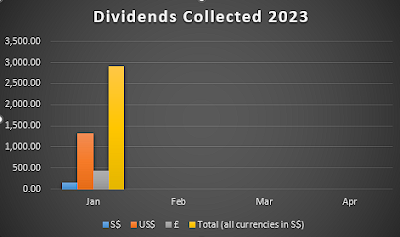 Not much at the start of the year. Some local counters that paid in Jan 2022 seem to shifted their dividend schedule. 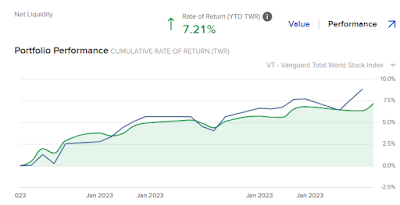 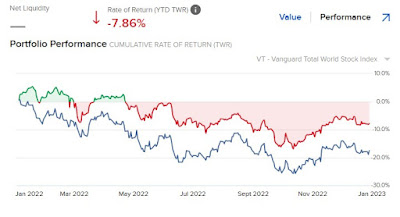 Even though the SGD has strengthened considerably against the US$, my IB portfolio appears to have almost recovered its 2022 losses.  Having said that, I note that in 2022, my portfolio was green in Jan-Feb only to crash in March 2022. The same could happen this year though I am optimistic that it won't. Revenues of most companies should actually increase at least on a nominal basis due to inflation so hopefully that should provide some support.
Of course, companies that in debt and are not making money and find their costs increasing due to inflation may not fare that well.
Posted by Hello World at 19:04 No comments: 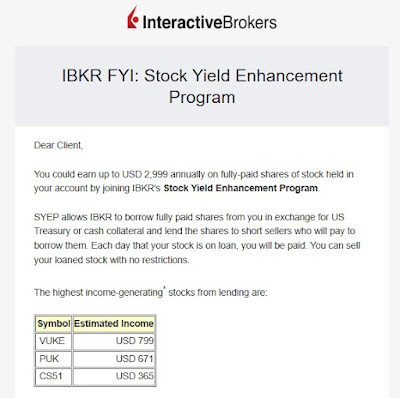 I never enrolled in IBKR yield enhancement program (aka share lending scheme) because I thought it only applied to US stocks and most of my stocks are UK-listed. Then I received this e-mail showing that I can make some coffee money even with UK stocks. Nice. Of course I know the figure is 'theoretical' and there is no guarantee the shares will be lent out, but getting some free money once in a while looks good, can treat myself to Starbucks once in a while
🍹🧉
Posted by Hello World at 04:29 No comments: 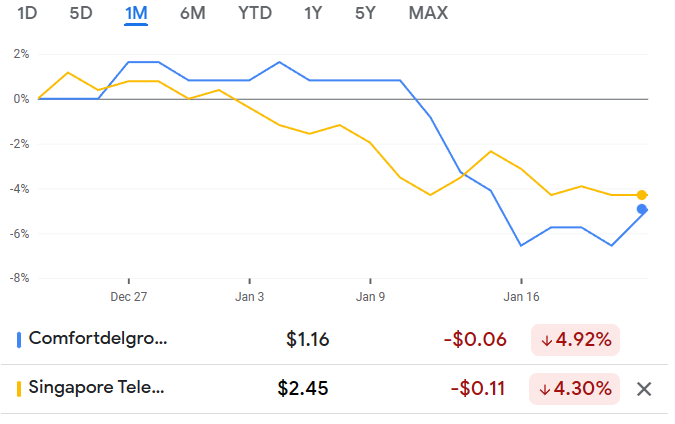 No soon had I mentioned reducing my stock-picking did I go out to buy Singtel. My excuse is that this is for my SRS account which cannot be used for foreign stocks (and I don't want to set up an Endowus account to access World Unit Trusts).

However, I have also bought ETFs this week to balance out my stock-picking, namely IOZ, LSPU, VWRD and VHYD. 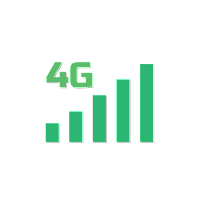 My portfolio value hit my 4th milestone this month, though I waited for 2 weeks to ensure that it was relatively stable and not a temporary blip. Together with record dividends collected in 2022, I feel I have a reasonable margin of safety when it comes to maintaining financial independence in the face of a possible recession in 2023 (or so the experts claim). However, one thing about recessions is that if too many experts forecast a recession, it usually doesn't occur.

What is interesting is that the last 2 gaps were quite consistent:

As explained in my portfolio page, the gap between the 1st and 2nd was large because I was repaying my housing loan.

I didn't make a New Years' Resolution for Investing this year, but plan to continue on with my earlier resolution to BUY MORE ETFs and do LESS STOCK-PICKING.

As it is good to set a target and to measure progress, my 4th milestone is now replaced with a 5th milestone and I'm looking at achieving it in 2-3 years' time based on previous progress.

A fair chunk of my cash balance will be wiped out as I really need to replace my car this year and I am hoping for a lower COE (as COE quotas are increasing later this year). If not for car replacement, I would have been more confident of reaching my 5th milestone in 2 years' instead of 3 years'. Car ownership comes with an opportunity cost, but as long as one properly budgets for it, it is manageable. 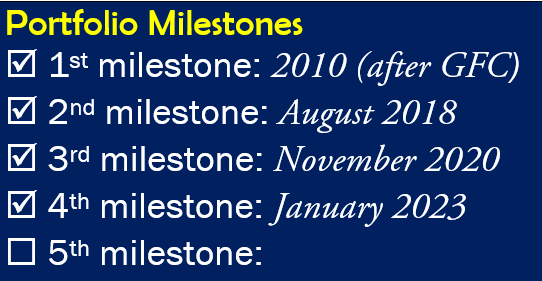 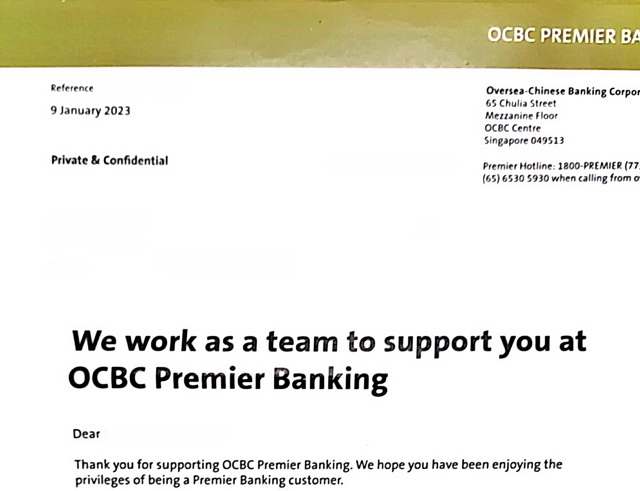 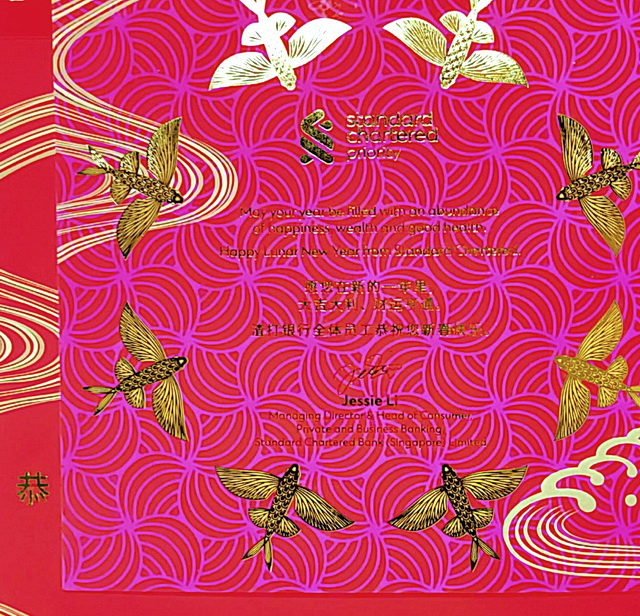 Before Chinese New Year, it is useful to get new red packets, especially ones that are of higher quality. Since people are giving out fewer and  fewer red packets (less children to give too), its good to have a small number of quality red packets rather than a large number of generic red packets (which are used up by school children for classroom decorations most of the time).

This year, OCBC Premier Banking sent me a letter telling me they are working as a Team. But if they are sending this during CNY season, where's the OCBC PB red packet? A bit disappointing to waste postage/paper/envelope just to tell me the rather obvious fact that there is a "team."

On the other hand, Standard Chartered seems to have gotten it right by sending me their PB red packets.

This sort of comparison between banks should of course not be taken too seriously, but I just want to give a shout out to SCB for their effort and I do appreciate getting some spare red packets. The nicest ones I have are from my car dealer but of course one must be careful when giving red packets with a car brand that you do not want to be seen "showing off" what brand of car you drive....

Anyway, A happy Lunar New Year to everyone!

Comfort Delgro price crashed and I bought more at $1.17. 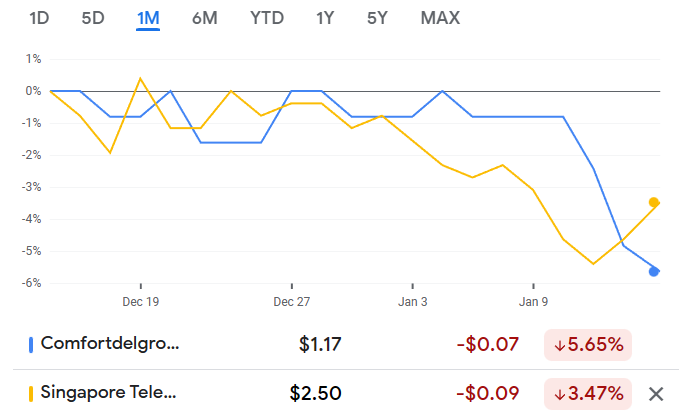 There were no SGX announcements in 2023 and the only news I saw was a RHB analyst report issued on 13/1/22 that pointed out the sharp decline in public transport EBIT in 3Q22 and downgraded their price target to $1.65. The 3Q22 results were announced earlier so it was old news. As the market is forward looking, this decline may have something to do with 4Q22 results which have not been released and I hope nobody is trading on confidential inside information.

Anyway, I bought more Comfort Delgro at $1.17 and I plan to accumulate more next week. Just nice that I have funds from the sale of Sembmarine shares that I need to redeploy.

Another counter on my radar is Singtel which similarly crashed by a similar percentage over the course of this month.